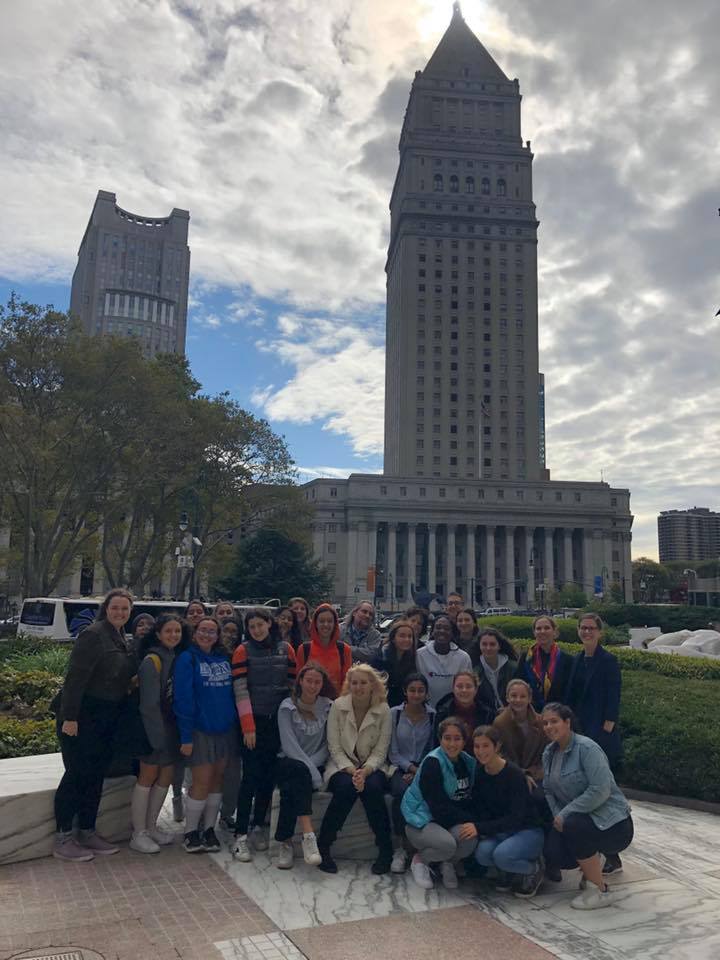 This year on the Riley’s Way Council, a dedicated group of high school girls and women with a mission to spread kindness and lead with empathy, members from the Hewitt School and the Young Women’s Leadership School of Astoria are working on breaking down false and damaging stereotypes and narratives about immigrants who come into the United States through the use of service learning initiatives and activism. In May, we had our first letter writing event in order to send heartfelt and uplifting letters to children and teens being held in detainment camps and separated from their families, and with the support of our broader community, we made over 100 letters to send!

The Riley’s Way Council is partnering with KIND (Kids in Need of Defense), an organization of compassionate pro-bono attorneys for immigrant children and families. In order to learn more about our mission to support immigrant rights and justice, on Thursday, October 10th, the Riley’s Way Council visited 26 Federal Plaza with the members of KIND. We had the chance to observe what it may be like for someone in immigration court to go through a trial that could determine an important part of their life. We witnessed people from many different backgrounds recounting their stories and experiences, some of them kicked out of their own homes and forced to find refuge here in the United States. Some of the defendants did not speak English, and therefore required translators and translated videos. It can already be hard enough to understand the terminology used in courts in the same language that you speak, but imagine having to report to a court with a completely different language and try to keep up with the quick translations? I could only think that it would be quite stressful to be in a situation like that. These families and individuals being tried in Federal Court, most of them just trying to survive, are strong, brave people.

From my perspective not only as an observer but as a Spanish language student in school, I was able to apply my knowledge when hearing Spanish translations. This was the first time I felt like I was able to use my skills outside of the classroom, and it was honestly a bit emotional. As I listened and interpreted (as best I could) a video in Spanish, illustrating the rights of the defendant, I felt empathy in a new way. The woman who watched the video in front of the judge depended on the information for the sake of her freedom and life in America. As I listened to it more, I began to imagine myself in her shoes on an even deeper level with the understanding of what it can be like to be in a position where perhaps the only current reliability lies in the familiarity of the language you hear, in the midst of the potential feelings of fear and uncertainty as you are being told you may be deported to a completely different country.

I feel it is important that I clarify that I cannot speak accurately for someone going through a situation in which they may be deported, in which they may be disconnected from their family, and I indeed may have a completely different understanding of what that might be like. Connecting with empathy, I believe, is still significant to having even the most basic insight in any case. The impact of my experience trying to follow along with the Spanish in that video did not catch up with me until after I reflected on it. Having had the chance to observe the realities of those facing the government in immigration court with the Riley’s Way Council members was an important experience for all of us in practicing empathy and gaining a deeper insight into the lives of those we wish to help and support. Moving forward, with the help of my friends in the Council, I want to engage the empathy of others and combat the harmful perceptions of immigrants by sharing what we have learned first-hand with the world through our next project.