The Flint Justice Partnership at the University of Michigan-Ann Arbor aims to serve and connect with the Flint community and educate UM students about the Flint water crisis. FJP partners with multiple organizations to advance our mission. FJP was co-founded by Michal Ruprecht, Lindsay Miles, Quinn Nolan, Emily Welch, and Demetrius Ford in October of 2018.

July, 2020
Dilpreet Kaur and Jon Musai are sophomores at the University of Michigan-Ann Arbor. They are the community and campus outreach chairs of the Flint Justice Partnership (FJP). Dilpreet and Jon wrote about their experiences as first-year FJP members in this blog.

Dilpreet’s story
Heading into Flint I didn’t know what to expect. I didn’t know if my current identity would hinder other perceptions of me and my willingness to help.

As someone who has lived in New York for their entire life, I was unaware of the crisis that Flint was suffering from. The exposure to the crisis that I had before traveling to Flint was limited. I had only read an article or two discussing the water crisis in English class. From the little that I read, I knew the water was dirty and the people of Flint were unable to drink their tap water. However, after coming to Michigan, I was introduced to FJP. I was eager to learn about the topic because I was unaware of the severity of the issue.

As a part of FJP, I feel that I have gained a greater sense of knowledge about the problems that are within our locality and affecting people on a large scale. Through FJP, I’ve been able to attend service trips in Flint, where we partner with a local organization to serve homebound residents. By going to Flint, I feel empowered and wish to bring about change and serve the underserved.

One encounter that resonated with me was of a young mother who was so surprised and thankful that we came to her house because she was just about to run out of clean water. While we were there, she asked us to give her the phone number of the organization we were partnering with so that her sister could have access to the resources as well. She was just glad and overwhelmed that someone had finally heard her and listened to what she needed. She kept thanking us and that is truly what I take away from that experience.

Jon’s story
I didn’t really have the opportunity to learn about the Flint Water Crisis when it was first occurring. All I remember about the water crisis was the fact that Flint had contaminated drinking water and President Obama came to Michigan to visit the Flint community. Other than that, the conversations surrounding the Flint Water Crisis quickly disappeared, and I didn’t think much of it as I assumed that Flint was probably showing improvement. Unfortunately, I was wrong.

During my freshman year of college, I visited Flint on a volunteering initiative with FJP as we partnered with Crossing Water to help deliver bottled water and other basic resources such as canned food and wet wipes to homebound Flint residents. Something that stood out to me during this experience was that the residents were always open and welcome to allowing FJP volunteers to enter their homes, set up water filters and teach them how to maintain the filter. As we delivered resources from home to home, it was striking to hear that several years after the water crisis had begun, Flint still didn’t have access to clean water. Clearly, there was a large gap between the Flint community and impactful solutions to combat the water crisis, leaving the City of Flint in a vulnerable position.

Undoubtedly, FJP has opened my eyes to the severity of the water crisis as I quickly realized that this issue has roots within the public health, economic and political avenues of the Flint community. As college students, we often get sucked into the bubble that is our college campus and fail to grasp the realities that neighboring communities are experiencing. Consequently, as a member of FJP I hope to make the information available to my peers that despite its mainstream neglect, the Flint Water Crisis remains a very potent issue within the lives of Flint residents.

Our story and mission
Taking all that we have learned and experienced, we understand that the Flint Water Crisis is still ongoing and exerting devastating consequences on the health and economic wellbeing of the Flint residents. Unfortunately, we have noticed that many people have begun to forget about Flint because the media has nearly stopped covering Flint. But the reality is that the water crisis has been ongoing: more than 2,200 days.

The initial news about the water crisis was devastating, and the ongoing, permanent damage to the community is even more saddening. Nearly 30,000 schoolchildren were exposed to lead, a neurotoxin that affects neurodevelopment and function, and many of them now require special education support. According to the New York Times, the percentage of the city’s students who qualify for special education services has nearly doubled since the water crisis began. Studies are still being conducted on how the lead poising has affected Flint children. Early findings from a study conducted by Flint pediatrician Dr. Mona Hanna-Attisha show that 80 percent of 174 children tested will require help for a language, learning or intellectual disorder.

We both failed to understand the consequences the City of Flint has had to endure following the water crisis. Our work in Flint has demonstrated to us that the water crisis is an ongoing issue, whether the media recognizes it or not. Although State of Michigan officials claim the water is safe to drink, we have seen and listened to residents tell us otherwise. Even though street piping is being replaced, many residents are still left with lead piping in their homes and now many of them are forced to devote extra resources to their special education children. In fact, Flint has been filtered out of the general public’s focus despite the manifestation of the prolonged, long-term effects of the water crisis. And similar environmental racism is perpetuated in communities like Newark, NJ; Denmark, SC; Navajo Nation; and many others.

Much work is needed to be done. It is everyone’s job to continue to advocate and fight for Flint alongside residents. Our recent partnership with the Riley’s Way Foundation will not only enable us to help those in need in Flint, but it will also provide us with a platform to address the water crisis on a larger scale. We hope to foster our partnership by connecting with a diverse group of leaders in healthcare, water sustainability and many more fields to continue to educate the University of Michigan community about the state of Flint and the many other communities.

December, 2020
The Center for Social Solutions (CSS) sponsored the Flint Justice Partnership (FJP) on Thursday, October 29. The two organizations hope to work together to advance their mission of water access.

FJP was founded two years ago by a group of University of Michigan-Ann Arbor freshmen that wanted to bring attention to Flint and the water crisis. After not being able to find an on-campus organization dedicated to the Flint community, the group decided to start FJP in partnership with the Michigan Community Scholars Program. FJP is built on the idea of partnerships and long-term, sustainable work. The organization educates students about the water crisis through dialogues, information sessions and social media. They also serve and connect with the Flint community through partner organizations, including Crossing Water, Food Bank of Eastern Michigan and Hurley Medical Center.

FJP’s co-chair and U-M LSA junior Quinn Nolan said the group is excited to start this partnership. He added FJP is very thankful for the support they received throughout the process from CSS and Michigan Community Scholars Program.

"We're beyond excited to be a part of the Center for Social Solutions family,” Nolan said. “Even during these uncertain times, we're ready to continue and expand our work."

CSS was launched by Lewis in 2018 to address three core areas of social concern: diversity and race, water, and the future of work. Lewis and the CSS team are excited to begin the partnership with FJP. 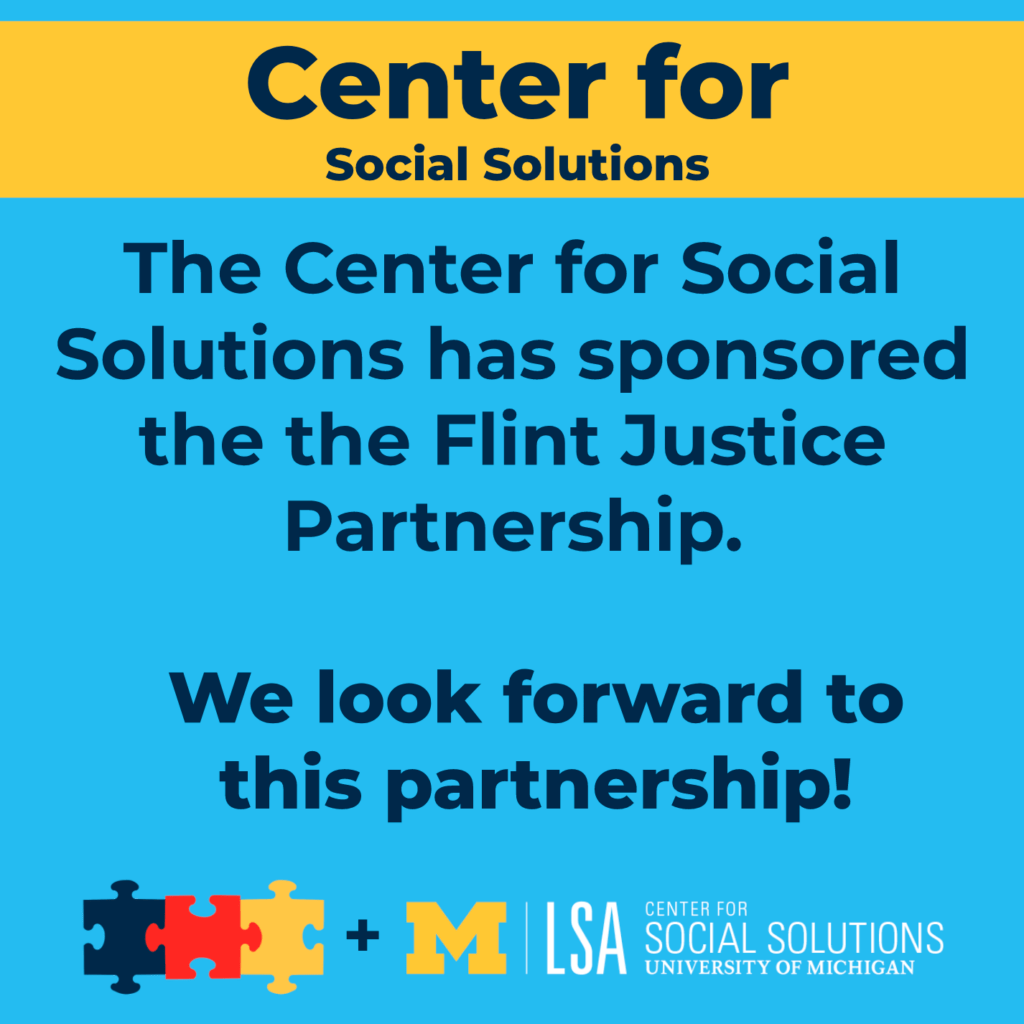